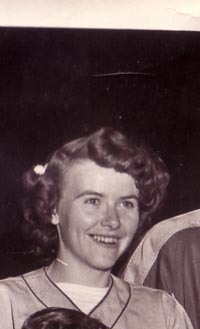 Mary Jane Bramman Cooper really was a girl in a boy's world on the sandlots of Iowa. As a child aged 9-15, she honed her skills in sandlot hardball games playing against the best boys on the block.

From 1942-1951, Cooper played fastpitch for teams in Iowa, Texas and Western Washington. Between the years of 1948-1951 she played in four Washington State Tournaments, three regional tournaments and several invitational tournaments. Her team-high average always landed somewhere between .350-.400, and she helped lead her teams to three state tournament championships.

Cooper's playing career ended in 1952 when she started to raise her family, but she found her way back into the game as a fastpitch coach in the early 1960s. She recently received a plaque honoring her as the "Most Loyal Fan" of her grandson's games, and seeks to support the sport any way she can.

Cooper is a native of Davenport, Iowa, and graduated from Clinton High School in 1940.