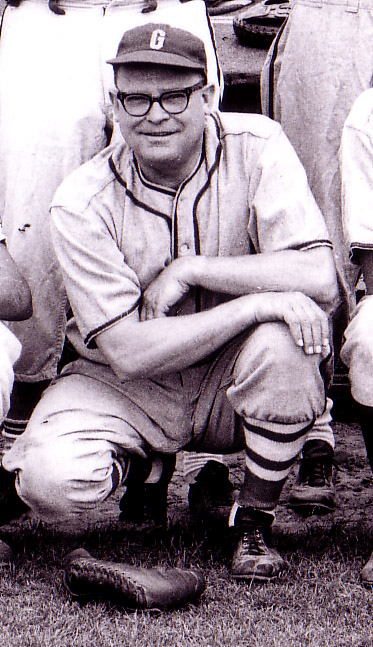 Walt Jutte was born on July 7, 1914, in Uniontown, Wash., and played baseball and basketball at Uniontown High School, graduating from the school in 1932.

After moving to Tacoma in 1939, Jutte owned the Hide-A-Way Tavern for several years before moving to Olympia where he worked for the State Assessor's Office before retiring.

Jutte, for most of his career a shortstop, played for Superior Dairy in the Tacoma City League in 1939. Among his teammates were Les Bishop and Art Berg. After a stint with Milton in the Valley League, he played for Tacoma in the Shipbuilder's League, counting Dave Goodman and Joe Salatino as his teammates.

Between the ages of 44 and 48, Jutte still played with the Frank "Bush" Tobin-managed Tacoma Oldtimers, who counted among their opponents the inmates at McNeil Island.

"I think the highlight of my career was being able to play so many great teams while I was in the Shipbuilders League," says Jutte. "I remember one game we were playing Sacramento of the Pacific Coast League and in the sixth inning their pitcher still had a no-hitter. I got things started in the sixth with a triple, the first hit for us in the game, and then we really got rolling and beat them, 7-6. I think my teammates figured that if Jutte could get a hit, then anyone could get a hit."

Jutte ranks Bill Libke as one of the best pitchers he ever faced, adding that teammate Lefty Isekite was an outstanding hurler. Teammates Goodman and Salatino were top hitters of the day, and Salatino and Sonny Bailey were noted for their outstanding defensive work in centerfield. As far as infielders, Rudy Tollefson was a good fielder and "was such a great line drive hitter that he was always on base."

Jutte tells an interesting story about Pip Koehler, who managed him in the Shipbuilders League.

"I was at bat with one out and the winning run was on third base. Pip asked, 'Can you hit a fly ball?' I said, 'I'll try.' Pip responded by saying, 'No, I said can you?' I again replied, 'Well, that's what I want to do.' Pip then shot back, 'Well, do you mind if I pinch hit for you because I know I can!' I said, 'Well, if you think you can do it then go ahead because I want us to win the game. Well, darned if he didn’t walk up there and promptly hit a fly ball to win the game. I was amazed that he could be so confident to do that!"