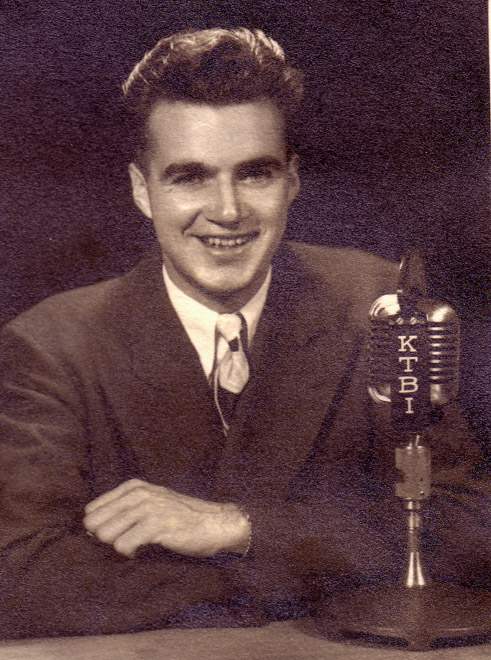 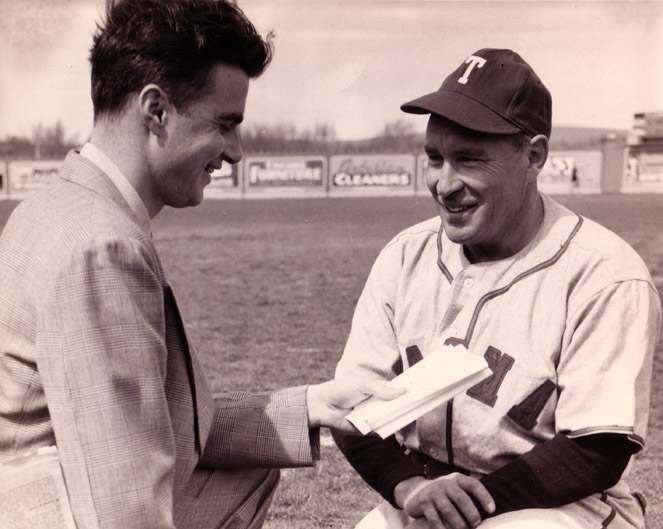 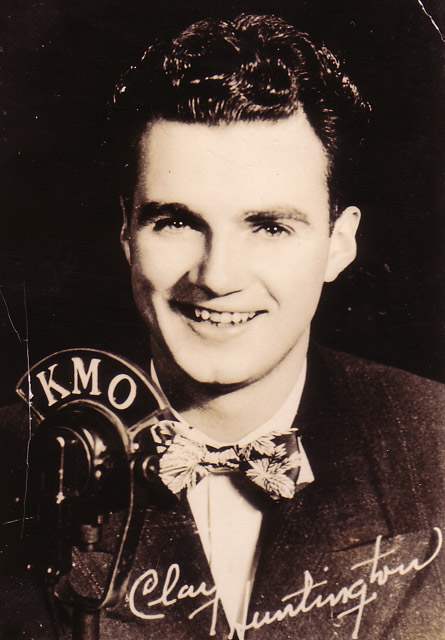 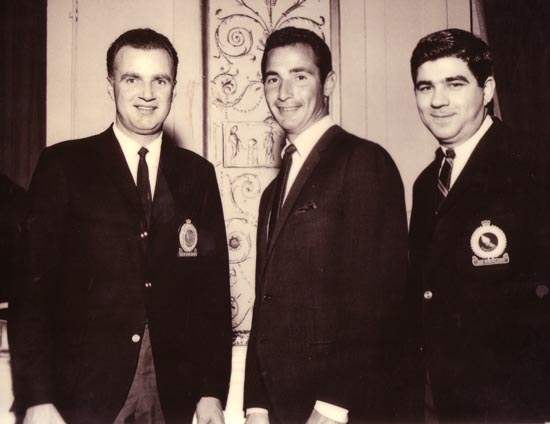 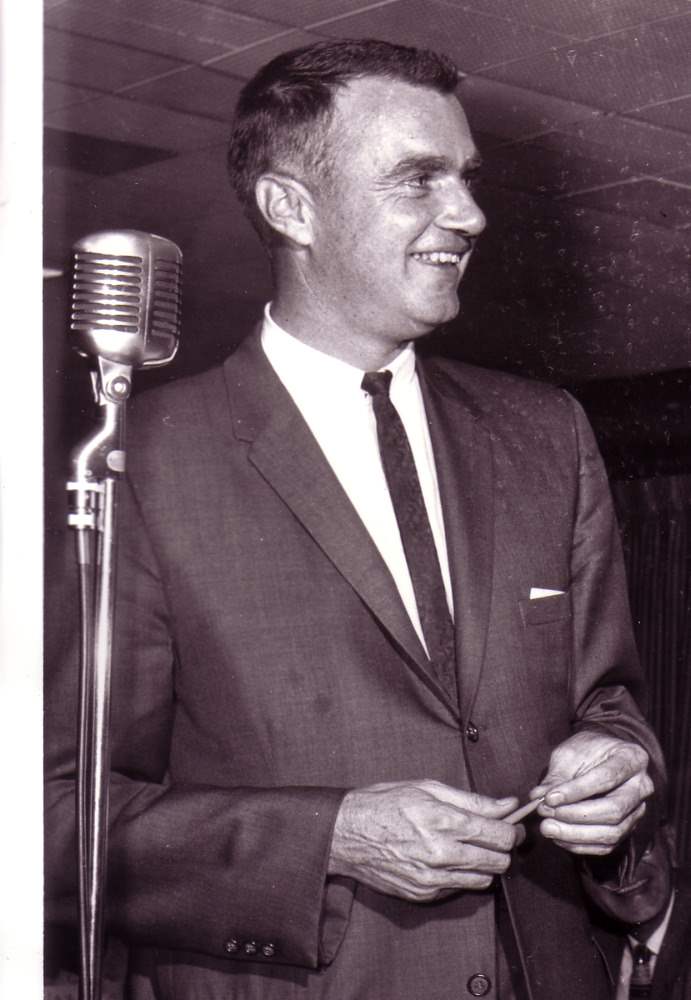 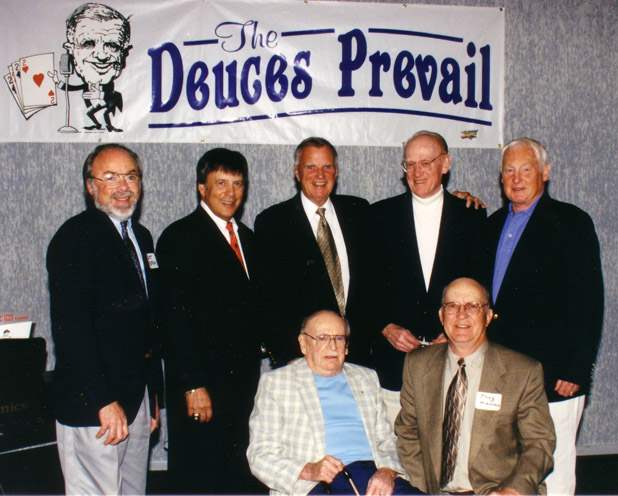 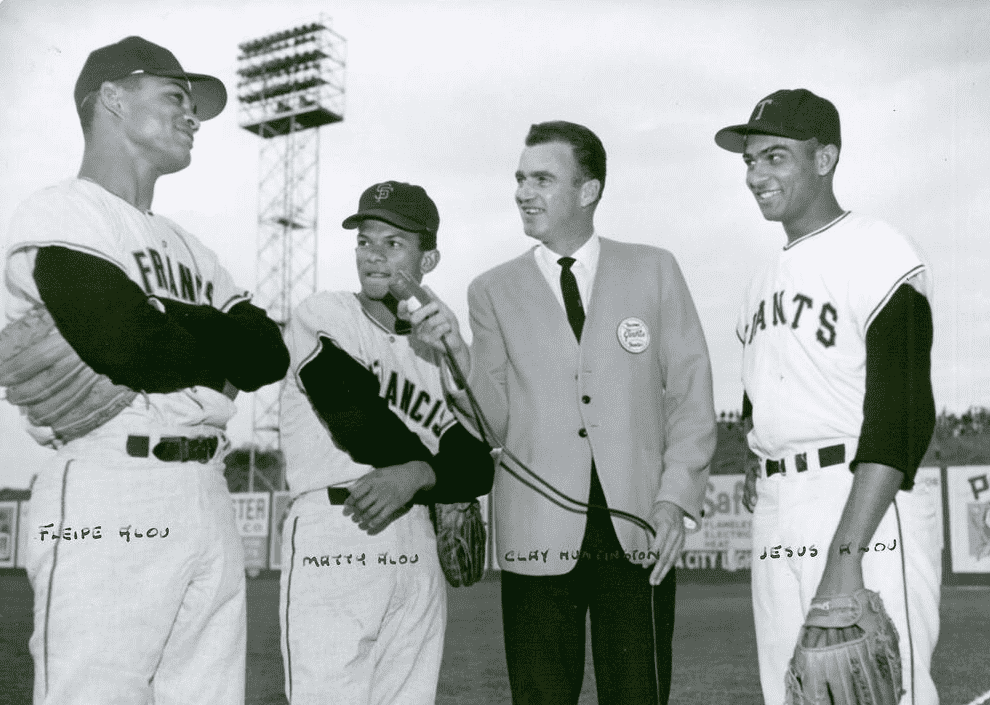 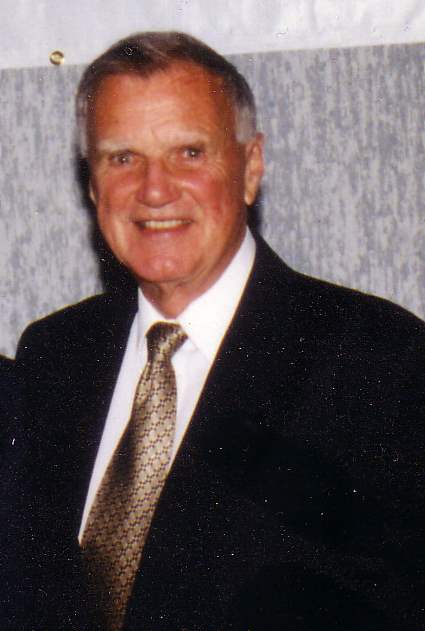 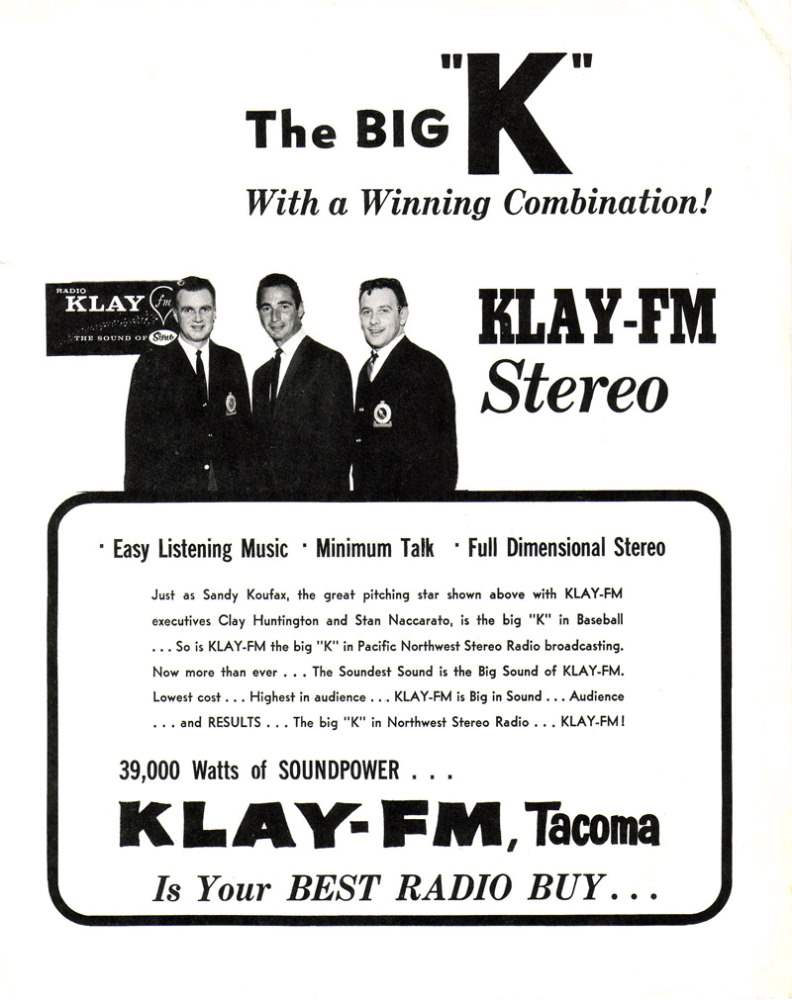 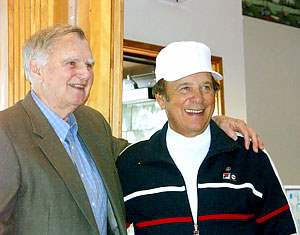 ”Two Out, Two On, Two In
—the Deuces Prevail”

Clay Huntington was a Tacoma sports broadcaster (high school, college, and professional sports) for more than 40 years. He was perhaps best known as the voice of the Tacoma Tigers of the Western International League from 1946-51.

He also did the color commentary for the Tacoma Rockets hockey club in the late '40s and early '50s. Clay also was a sportswriter for the Tacoma Times. He was one of the founders of the Tacoma Athletic Commission and a two-time President.

Clay was also one of the key figures instrumental in bringing Pacific Coast League baseball back to Tacoma in 1960.

As this history illustrates, the media has been a crucial partner in the development, promotion, and even the invention of sports. Through newspapers, then radio and television, local fans are now vicariously linked to their favorite sport in ways inconceivable one hundred years ago. Tacoma’s Clay Huntington experienced it all as sports journalist and announcer. He did more, however, than just broadcasting, for he led various efforts to make sure that Tacoma-Pierce County had the facilities needed for local sports.

Clay Huntington’s model was undoubtedly his grandfather, Samuel Adams Huntington, who was both journalist and the promoter of sports facilities during the early years of the 20th century. Samuel brought his family from British Columbia to the City of Destiny, published a promotional weekly called The Sound, and in 1910 helped lead the Tacoma Chamber of Commerce’s effort to fund the construction of Stadium Bowl, the city’s first sports arena.

The family returned to Canada at the beginning of World War I, but Clay’s father returned to Tacoma later on. In a 2004 interview Clay recalled, “ I got my start in broadcasting at the age of 10 or 11. The neighborhood gang would play games in a vacant lot that we converted into a football and baseball field and we attached a hoop to an old barn at the end of the lot for basketball. When I wasn’t playing, I’d climb up into a tree and sit on the branches overlooking the field and practice my play-by-play of the games. Jerry Geehan, Tacoma’s first sports broadcaster, was an idol of mine and so I followed his broadcasting of events throughout the 30’s. The first sportscast that I ever did was in the fall of 1941 on KTBI. It was a 15-minute show sponsored by Kreme Krust Bread and Bert’s Mens Wear and my two guests were Vic and LaVerne Martineau. I’ve been involved in the business ever since.”

While attending high school just before Pearl Harbor, Clay launched his journalist career by writing and editing the Lincoln High School newspaper. By 1942 he was a journalism student at the University of Washington while also reporting the results of local high school games. He must have made an impression on local sports enthusiasts, for just before his war service in the Navy this teenager approached Mayor Harry Cain about arranging a football game in Tacoma between the 2nd Bomber Command and March Field (Orange County, Calif.). The mayor called together a group for a meeting in his office. “Here was I a kid in high school meeting with the mayor and other community leaders.” The result was a decision to form the Tacoma War Athletic Commission (re-named the Tacoma Athletic Commission in 1946), which raised money to buy athletic equipment for local servicemen. “ The TAC really isn’t a commission. It is an athletic roundtable. But the name stuck,” said Clay.

By war’s end, Clay was certain that a combination of sports writing and radio announcing was his calling. He became the Saturday sports editor for the Tacoma Times while also taking journalism courses from Murray Morgan at the College of Puget Sound. He remained at the Times while attending C.P.S. until the News Tribune purchased the newspaper in 1949. Gradually he shifted from the printed sports page to radio and television announcing, a career that lasted into the 1990s.

Throughout the years his radio voice could be heard reporting local football, basketball, and baseball games for KMO, KTBI, AND KTNT. His Tacoma Tiger baseball broadcasts from 1946-1951 are well remembered by old Tiger fans. With two out and two on at the count two—and—two on the batter, Clay would utter his trade-mark and favorite description “the dueces prevail. All of those who listened would wait for that and will never forget it!

In the 1950s, before the time of on-site play-by-play broadcasting, he re-created major league baseball games with Rod Belcher over a 14-station network that covered Washington, Oregon, and Alaska. In 1953, he entered the realm of television announcing for both channels 11 and 13. Along the way, he also encouraged other sports broadcasters, including Bob Blackburn, who was the voice of the Oregon State Beavers, as well as the Pacific Coast League Portland Beavers, before moving to Seattle.

Sports broadcasting is not, however, all there was to Clay Huntington. Like his grandfather before him, he had a sense of community that took him from behind the mic to center stage. Indeed, when asked what his proudest sports moment was, he pointed to his grandfather’s efforts to fund the Stadium Bowl and compared his own role 50 years later in helping to fund the construction of Cheney Stadium in 1960 and bringing Triple A baseball back to Tacoma. His was rightfully proud of his effort, one that has led to over 50 years of Pacific Coast League baseball in Tacoma.

He also helped fund other sports facilities, including Heidelberg Park, an endeavor pointing to the realization that Clay’s and Tom Cross’s efforts worked hand in hand. Tom created the sports programs and Clay rousted local donors into providing the funds needed to create the facilities.

When talking to Clay, you would encounter a walking textbook of early Tacoma history and stories that went beyond the realm of sports. It is no wonder therefore that his contributions to the community also include the promotion of sports history. He initiated the Tacoma-Pierce County Sports Hall of Fame in 1957, and in 1960 expanded this honor roll – with the support of then Governor Albert Rosellini – to include the State of Washington Sports Hall of Fame. Clay was also a co-founder of the Shanaman Sports Museum of Tacoma-Pierce County.

This city’s sport’s treasure continued his broadcasting career through his own radio station-KLAY-one that continues to provide coverage of local sports be it high school, college, or professional. Because he started sports writing and sportscasting as a youth, he had his eyes and ears turned and tuned to the future generations of talent. To make sure that today’s best youngsters can proceed, the Tacoma Athletic Commission, in 2000, established the Clay Huntington Sports Communication Scholarship Award to help high school graduates in their pursuit of sports broadcasting and journalism. Today, boys and girls from throughout Tacoma-Pierce County high schools are well on their way toward continuing the traditions begun by Clay Huntington some 65 years ago.

A sports icon in our community, Clay Huntington passed award on June 1, 2011 at the age of 89. On April 21, 2012, on what would have been Clay’s 90th birthday, the Tacoma Athletic Commission, the City of Tacoma and the Tacoma Rainiers celebrated Clay’s life and accomplishments in the renaming of Cheyenne Street, a key access off 19th Street leading into Cheney Stadium, to Clay Huntington Way.

WATCH A SHORT VIDEO OF CLAY

Doug McArthur and Clay Huntington teamed up for the play-by-play when Foss HS played Selah HS on Sept. 9, 2004 in the first-ever Touchdown Classic football games played in the Tacoma Dome. Selah defeated the Falcons 17-7. 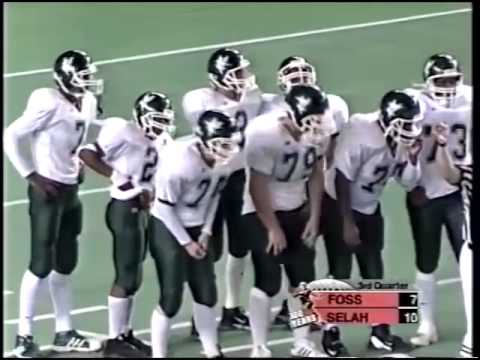 Clay Huntington interviews Will Sherman, defensive back for the Los Angeles Rams.