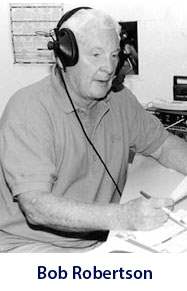 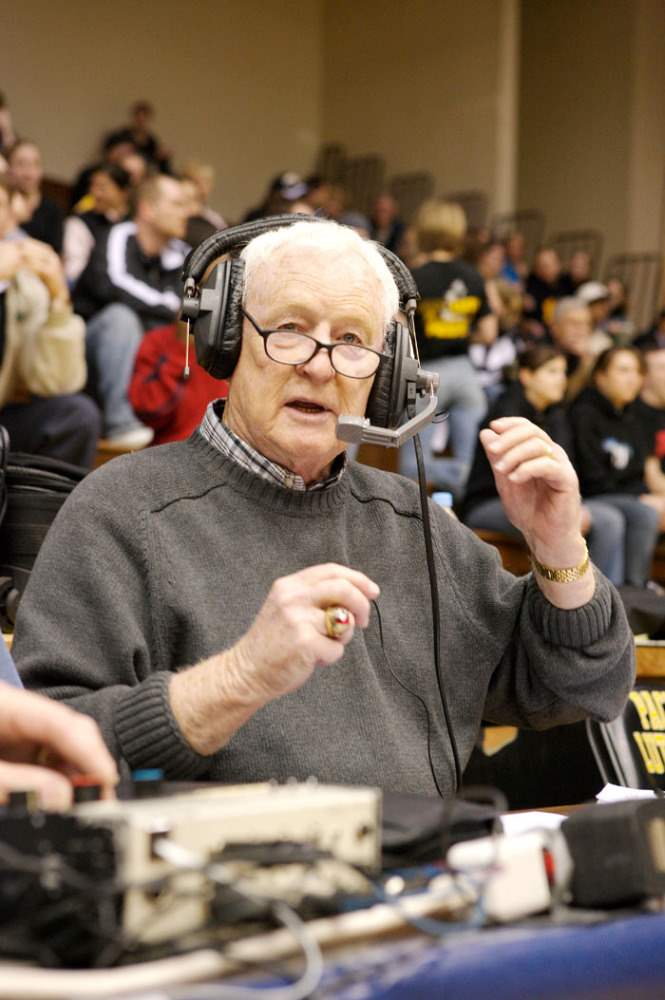 His voice and his signature sign off are arguably the best known ever in Pacific Northwest sports broadcasting annals. Indeed, Bob Robertson has graced this region’s airwaves for more than six decades, broadcasting high school, college and professional sports to many hundreds of thousands – probably millions – of listeners who have lived and died by his every word.

It would be difficult to say in which broadcasting job Bob made his mark because he has been one of the best in the business at so many levels and in so many sports since getting his start in the late 1940s.

He might best be known as the long-time play-by-play voice of Washington State Cougar football and basketball. In fact, he started calling WSU football play-by-play all the way back in 1964 and, except for a run from 1969-72 doing Washington Huskies football, remained in that position until the 2013 season. At that point he moved over one chair to serve as pre- and post-game and halftime host for Cougar football broadcasts. His tenure with the basketball program lasted more than two decades from 1972-94. Most all of his WSU broadcasting has come while commuting from his Tacoma home to Pullman and then back again for weekend games and mid-week coaches shows.

The older folks in the crowd might remember Bob more for his decades of handling the sports reporting and announcing for a couple of local television stations. Either way, Bob Robertson is truly a legend whose longevity in the broadcasting field is without peer.

Bob was born on March 14, 1929 in Fullerton, Calif., and it is fitting that he came into the world near a baseball spring training camp, because it was in baseball that he got his first major broadcasting break.

Growing up in Vancouver, B.C., Bob eventually came just south of the border and graduated from Blaine High School in 1947, but not before getting a start doing high school sports play-by-play. He moved on to Western Washington University where, while studying broadcasting, he served as the voice of the Vikings.

A baseball player with enough talent to draw the attention of professional scouts, Bob initially played semi-pro ball for both Bellingham and Wenatchee of the Western International League before signing a contract with Portland in the Pacific Coast League.

While that seemed to be a great break for the outfielder the Bellingham Herald descriptively referred to as the “carrot-thatched centerpatcher,” Bob saw a better future describing the action than participating in it. To that end, he became the radio play-by-play announcer for the Wenatchee Chiefs of the WIL, handling that job in 1949 and 1950. That got his career off and running.

In October of 1950 Bob moved to Tacoma to take the job as sports director at KMO Radio. He has been here ever since, except for 1955 and 1956 when he served as the television announcer for Notre Dame football and basketball in addition to working as sports director for WNDU-TV in South Bend, Ind.

While in Tacoma he helped Channel 13 hit the television airwaves for the first time in 1953, and after leaving for his stint in Indiana, he came back to Tacoma to work at KTNT-TV Channel 11 (now KSTW) from 1956-70 and later from 1976-83. From the late 1950s and through the 1960s he did the television call for Seattle Rainiers, Tacoma Giants and Tacoma Cubs baseball games. He also served as the basketball voice for Seattle University during that time.

Later, Bob moved into the radio booth where for 16 seasons until 1998 he served as the play-by-play voice for the Tacoma Tigers and Tacoma Rainiers.
In the days when broadcasters did not travel with their teams, Bob was one of many play-by-play men to recreated road baseball games from a local radio studio. Bob would take information from off the wire and weave those strands of information into a tapestry of minor league baseball broadcasting brilliance.

For the soccer fan, the voice of Bob Robertson introduced what for many was a “foreign sport” to a region that has since established a love affair that can be seen every time 40,000-plus fans pour into Century Link Field to watch the beloved Seattle Sounders. Back in 1974, when the Seattle Sounders of the North American Soccer League played in the Kingdome, Bob was the play-by-play announcer. He has since been inducted into the Washington State Soccer Hall of Fame and in 2013 was honored with the coveted “Golden Scarf” award by the current Sounders team for his role in introducing the region to this popular worldwide sport.

On Aug. 30, 2014, he will be inducted into the Vancouver Canadians Broadcast and Journalism Hall of Fame at Nat Bailey Stadium in his former home of Vancouver, B.C.

His awards for broadcasting, like his Hall of Fame inductions, are numerous. The 1995 Washington Broadcaster of the Year for all categories, Bob is a 15-time State of Washington Sportscaster of the Year. In 2004 he received the Chris Schenkel National Football Foundation Award, and in 2011 he was the Keith Jackson Award recipient at the Seattle Sports Star of the Year ceremony. Washington State honored its legendary play-by-play announcer by naming Martin Stadium’s broadcasting booth the Bob Robertson Suite in 2009.

The silver-haired Robertson has by no means hung up his Sennheiser headphones. At 85 youthful years he remains part of the WSU football broadcast team, works 30 road games for the Class A minor league baseball Spokane Indians, and does the play-by-play duties for Pacific Lutheran University men’s and women’s basketball.

Oh, and for you local baseball fans, you will certainly recognize Bob’s distinct, well-known voice calling the action when the Tacoma Rainiers play Monday night home games. And make sure you’re listening at the end of the broadcast when Bob intones his famous sign off: “Always be a good sport, be a good sport, all ways.”

Bob Robertson and Jimmy McAlister describe the action as the Tacoma Stars defeated the Dallas Sidekicks in a Major Indoor Soccer League game played on December 30, 1990 in Dallas.

Bob Robertson at the mic as the San Diego Sockers edged the Tacoma Stars 4-3, in Major Indoor Soccer League action on January 4, 1991 in San Diego.

Doug McArthur interviewed in 2007 about the Stanley Shoemen National Championship baseball team of 1956.

Stan Naccarato interviewed about Baseball Tacoma Inc and how they saved baseball in Tacoma at the end of the 1971 season.