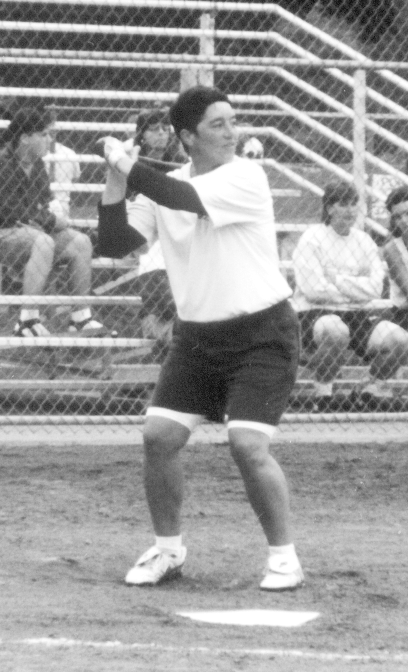 One of the best female athletes in Tacoma history, Kathy Hemion graduated from Lakes High School and from Western Wash­ington University. She went on to a successful coaching career at Pacific Lutheran University.
Kathy, born in Seattle in 1952, attended Lakes High School when girls sports were not as well accepted as boys sports. That has changed for the better since 1970, when Kathy graduated, but the lack of opportunities didn’t stop her from becoming a successful athlete.
She competed in basketball, volleyball, field hockey, synchronized swimming and tennis at Western, but it was in basketball where she made her biggest mark. During her four seasons as a Viking, the team twice advanced to the AIAW national tournament, and as a result she is now a member of the WWU Athletic Hall of Fame.
After graduating in 1974, Kathy returned to her hometown where she picked up slowpitch softball, playing left-centerfield for numerous league and tournament championship teams during the summer months. Among that group were Spud’s Pizza, McKnight’s Foods, and B&I Sports. In 1994, she was inducted into the USSSA Slowpitch Softball Hall of Fame in the state of Washington.
She continued to play slowpitch softball until retiring from the sport in 2000. Besides softball, Kathy was an active participant in local volleyball and basketball leagues.
Kathy led the PLU women’s basketball program from 1975-85, coaching the team to a national tournament berth in 1980 and to an 18-win season in 1982. She also coached Lute volleyball for 10 years and slowpitch softball from 1975-76, an era in which the game was of the slowpitch variety.
Kathy, who served as a collegiate basketball official for several seasons, is currently a special education teacher in the Tacoma School District.