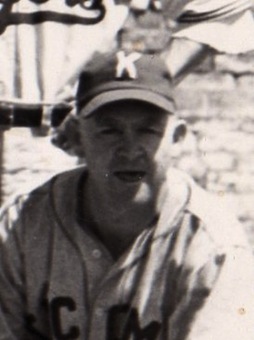 Cliff Schiesz spent many a year during the 1940s and 50s playing baseball in the Tacoma-Pierce County area. Whether it was for K Street in the City League, Madigan, Edgewood, Olde Pilsner, and Portland Avenue in the Valley League, in the Western International League with the Wenatchee Chiefs and Tacoma Tigers in 1947, or for the barnstorming House of David, Schiesz found his way onto the diamond.
Born January 3, 1924, Schiesz eventually attended Bellarmine Prepatory School, where he starred in baseball as well as basketball. A 1943 graduate of Bellarmine Prep (which inducted him into its hall of fame in 2001), Schiesz immediately began playing around the area. Among the teams for which he played semi-professionally, the Grays Harbor Merchants was one of the first. Schiesz made $20 a game with the Merchants – lucrative for the times, especially since the team often played doubleheaders.
In 1947, Schiesz spent spring training with the Tacoma Tigers of the W.I.L. Though he eventually was cut from the roster, Schiesz soon found his way onto the squad for the Wenatchee club in the same league, where he made $200 a month. When he quit that team, Schiesz returned to Tacoma. It didn’t take long for Hal Schimling to approach Schiesz with an offer from the Benton Harbor, Michigan, based House of David barnstorming club. The Israelite House of David originally barnstormed around the United States from 1930 to 1940. The team again hit the road from 1946 to 1955, and during that second stint made their way to the Northwest and West Coast.
When the team arrived in the area, it needed a couple of players. With an offer of $400 a month to play, Schiesz jumped at the chance. During his stint, Schiesz played with a House of David squad that played numerous games against the baseball version of the Harlem Globetrotters, as well as barnstorming games throughout California. When Cliff played for the House of David, only two players to his knowledge were actually “members of the order.” In the accompanying photo they are: Doc Tally (back row, third from left) and George Anderson (back row, far right). Cliff is in the back row, second from the left. Cliff is a retired firefighter.