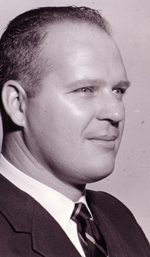 Harland was one of the most influential men in Washington amateur baseball from 1970-1986. He was the commissioner of the Nor-Pac NCAA Division I baseball conference (which included the Univ. of Puget Sound) from 1974-80. He also ran an equipment company called Baseball Unlimited and was instrumental is the Casey Stengel Northwest summer collegiate conference.

The Washington Casey Stengel Amateur Baseball Association had as many as 27 affiliates, including the Tacoma-based Cheney Studs, and operated through the 1986 season. Harland served several years as the national commissioner of Casey Stengel leagues. The Washington state leagues played their state tournament at Cheney Stadium with support from the Tacoma Athletic Commission for several years.

Along with stints as a reporter and editor at the Yakima Herald-Republic, Seattle Times, Everett Herald and Bremerton Sun came lifetime membership in the Baseball Writers Association of America.

Harland grew up in Yakima, later was an outfielder at Seattle Pacific University, and also played for and managed successful softball and baseball teams. He graduated from Yakima High School (now Davis) in 1950 and SPU in 1954. He retired from his multiple baseball-related endeavors in 1986. From 1993-97 he returned to the Kingdome for a second stint as the official scorer for Mariners games.