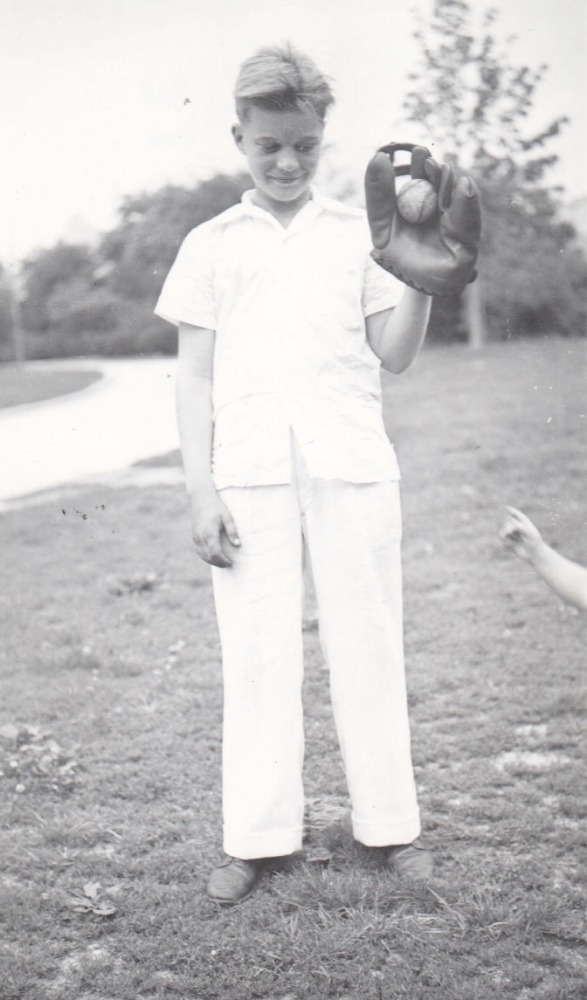 Like Ed Lopat, who gained fame as the "Junkman" of the New York pitching staff when the Yankees won five consecutive pennants from 1949-1953, Ted Lopat wanted to play high-level baseball. His brother got him a tryout with the Chicago White Sox.

An 18-year-old third baseman, he was assigned to Madisonville, Ky., in the Kitty League for the 1947 season, where he roomed with Bob Buhl, a pitcher who had a 15-year major league career mostly with the Braves and Cubs.

But Ted was injured after a month and went home.

The next year he played infield in the Virginia League, and the following season he hit .270 in the Cotton States League.

When the Army came calling, Lopat answered, and he was assigned to Fort Lewis for basic training in 1951. He was later stationed at Camp Hanford in Eastern Washington. He met Marie, his future wife, while he was based at Fort Lewis. They have been married since 1955.


Ted plays pro ball with the Madisonville Miners.
After he came out of the service he thought he was too old to get going in professional baseball again, so he thought he might try umpiring.

"My brother talked to me about it," Ted told writer Ralph Morrow in 1961, "and I decided to give it a try. You donn't know if you'll like something unless you try it. And that's what I'd tell anybody who is considering being an umpire."

Ted Lopat attended Art Passarella's umpiring school in 1953 in St. Augustine, Fla. As a graduate he was assigned to the Class D Georgia-Florida League.

"My first game was actually the first I'd ever umpired anywhere," Ted said. "Thought it would be a snap. But I learned quickly that there's a lot to learn."

1947 Madisonville, KY Miners of the Kitty League Ted Lopat is in the front row, fourth from the left. This was the first pro baseball team he ever played for.

One day he was in Brunswick, GA, where the Pittsburgh Pirates had spring training. Before the daily exhibition, he attended mass with the O'Brien twins - Eddie and Johnny, who were star athletes at Seattle University-- and another fellow Catholic, light-hitting catcher Vic Janowicz. Later that day, Ted was behind the plate with Vic catching and the O'Briens on the field.

After two years in the Georgia-Florida League, Lopat spent a season in the Piedmont League, two in the Northwest League and a three in the Eastern League.

"When I'm leaving the (ballpark), fans often yell at me," Lopat told Morrow. "I just keep thinking, "Mister, when you're punching that time clock at 8 in the morning, I'll just roll over and go back to sleep."

Though he had to travel by train or airplane six or seven months of the year, while his wife was back home in Tacoma, he never thought of his job as lonely.

"If you call not fraternizing with the players as being lonely, then I have a lonely job," Lopat said. "But even though we stay away from the players, we make our own friends in the cities around the league. I play golf, love to go to the movies. I'm happy in my job."

His working day consisted of three hours Monday through Saturday, but longer for Sunday doubleheaders.

"The hours are great," he said. "But it's a job with a real challenge, too. You have to gain the respect of the players and sometimes that's a big job."

Ted Lopat was an active Catholic, who often served as an usher. One Sunday he noticed future Cardinals catcher Tim McCarver sitting in the front row with teammates. When it came time to pass the collection plate, Ted started at the front row and put the basket in front of McCarver's group. When none of them contributed, Ted shook the basket a little harder until they all reached into their pockets for donations. Later that day, Ted was behind the plate and McCarver was catching. Tim came up to bat and got a hit. When McCarver returned to defense, Ted leaned over the crouched catcher and calmly said, "See what happens when you make a little donation?"


l. to r.: Richie Powers (who went on to have an outstanding career as one of the NBAâ€™s top referees), Bernie Gallagher, Ernie Gigliello, Tommy Richardson (holding the ball), Ted Lopat, Tom Ravashiere and Dick LiFreri.

Front row l. to r.: Unknown, Dick LiFrieri, Ted Lopat, Ralph DeLeonardis Tommy Richardson (President of the Eastern League). Pete Jaworsky, Ernie Gigliello, Mike Galomb and Tom Ravashiere. Richardsonâ€™s office was located in Williamsport, RH. He was involved in vaudeville and had his office impressively decorated with photos of the numerous stars he was connected with in his other line of work.

Skeeter Dickey, brother of the Yankeesâ€™ Bill Dickey, is shown on the left with Ted and Ed Lopat. Photo taken in Pine Bluff, Arkansas in January of 1949.


Ted tries to calm down an irate Hub Kittle, manager of the Yakima ball club in a Northwest League contest.

Yakima manager Hub Kittle argues with home plate umpire Ted Lopat as his catcher and pitcher join him in the fracas.

Umpire Ted Lopat is in position to make the call at home plate with the dust flying.

In the off-season, Ted Lopat built an insurance business in Tacoma. He was a Farmers Insurance agent for 35 years and worked many years as a district manager for Farmers.

After he quit umpiring, Lopat played slow-pitch softball for the B&I Bullets from 1963-66.

Lopat's umpiring gear, complete with insect repellant, deodorant and Bayer aspirin, is on display at the Shanaman Sports Museum at the Tacoma Dome.