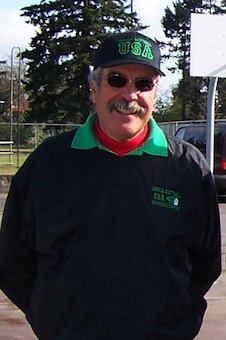 Born September 21, 1947 in Tacoma, it was working for his father, Julio who owned Grassi Motors, and playing sports that helped Ron to develop his easy going personality and where he learned to work hard and get along with others. And it didn't hurt that one of his uncles, Steve Grassi, even played minor league baseball for the Tacoma Tigers. Baseball was in Ron's blood at an early age.

Ron and his siblings grew up next to Jefferson Park at 6th & Monroe. One of his earliest memories is of hanging out behind the backstop while Stadium High School's varsity baseball team played. He enjoyed chatting with the catchers (such as Arley Kangas and Gary Tiederman) and umpires who were always nice to him and willing to talk about the game to a young fan.

No different than most boys, Ron progressed through Pee Wee, Bantam, Midget and Babe Ruth Leagues and also played at Mason Junior High and Wilson high. One of Ron's favorite coaches during this time was Larry Loughlin, a star pitcher for Bellarmine, who went on to play for the Triple A Hawaii Islanders in the 1960's.

Upon graduation from Wilson in 1965, Ron enrolled at TCC where he took a class on Sports Officiating taught by Bob Maguinez, Ron's former Cheney Studs football coach. It was an introduction to a personal pastime that defined much of his life. He began umpiring games during summer breaks from TCC and UPS and started to umpire regularly in 1967. As a teacher, his afternoons were free to call games and he progressed to higher levels.

After 43 years, Ron can still recall his very first game. It was 10 and under girls softball and his first indication that he had a lot to learn was when the catcher turned around and told him he'd better get louder because no one could hear him calling strikes. He also experienced his first controversial call at the same game. In those days, the girls had a habit of putting their hats in their back pockets due to having to wear a helmet. A baserunner was going around third when someone threw the ball and it landed in the hat in the runner's back pocket. Was this an out or interference or dead ball or what? Ron didn't have a clue what to call but was saved embarrassment when the ball fell out of the hat and the girl went on to score.

Ron's has been privileged to umpire five high school state tournaments and numerous district and regional tournaments. Ron served terms as board member and vice president with the Western Washington Baseball Umpires Association and served as the business manager for Western Washington Umpires Association. He is also a member the USSSA, NSA, ASA, ISA and SSUSA softball associations.

Umpiring has been a major part of Ron and his family's life. He was blessed to have a paying career as a teacher that enabled him to umpire school games in the afternoons and juggling schedules around his games and the sports schedules of his children was challenging but doable. And things have come full circle as Ron's grandson can be found hanging out behind a backstop. But this time, the young fan is chatting with the umpire - his grandfather, doing what he loves.