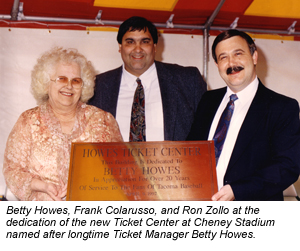 Frank Colarusso spent nine seasons in various roles with the Tacoma Tigers Baseball Club. He began in 1986 as the Director of Marketing, was promoted the following year to Assistant General Manager, and was promoted to General Manager after the 1991 season, staying in that role through 1994. Colarusso was the fourth general manager in the club's history following Rosy Ryan, Bobby Adams and Stan Naccarato, and he was also the youngest in the team's history until Dave Lewis took the helm. Colarusso replaced a Tacoma icon in Naccarato, who had been the club's general manager for more than 20 years.

During Colarusso's tenure, the Tigers had the franchise's first-ever season in which 300,000 fans attended games. He was the general manager during the 1994 season when the franchise set its single-season attendance record of more than 356,000 fans, and also its single-game attendance mark of more than 12,000, coming as a result of a promotional program with the Metro Parks Department. The Tigers consistently ranked in the top tier in attendance in the 10-team Pacific Coast League during Colarusso's tenure.

In 1992 and again in 1994, Colarusso earned the Larry McPhail Promotional Award in the PCL. Among the unique promotions he helped create: the first "Turn Back the Clock" Promotion when the Tigers wore authentic uniforms from the 1904 Tacoma Tigers; baseball card shows with major leaguers Catfish Hunter and Willie Stargell at Cheney Stadium; and Military Nights sponsored by Pepsi Cola.

Colarusso played an important part in negotiations that led to significant changes at Cheney Stadium in 1993. He helped negotiate a $350,000 grant from the Cheney Foundation to expand the stadium in 1993. It was the largest grant at that time awarded by the foundation. He also negotiated the long-term sponsorship contract with Pepsi Cola, Key Bank and Rosen Supply to put the new scoreboard in Cheney Stadium prior to the 1993 season. The project has generated more than $1.5 million in advertising for the team. In his nine years, Colarusso sold more than $2 million in advertising, tickets and promotions to help keep the Tigers as a strong member of the Pacific Coast League. Those items, in part, led to the Tacoma Tigers receiving a Small Business of the Month Award form the Tacoma Chamber of Commerce.

After leaving the Tacoma Tigers, Colarusso was part of the Tacoma Baseball Foundation that worked to raise the funds to purchase the Tacoma Rainiers. The group, led by community advocates, Brad Cheney, Jack Connelly and Jeff Lyon, raised approximately $4 million before the team was purchased by the Schlegel Group. Presently Frank serves as Major Gifts Officer for the Mary Bridge Children's Foundation.