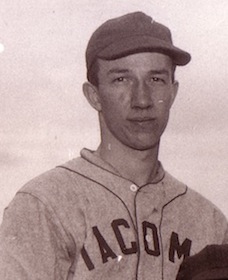 Bill Turnbull, born December 7, 1922 in Auburn, made his mark on the baseball diamond both behind the plate and leading the team in the dugout. As a catcher, Turnbull played for Stadium High School under coach John Heinrick when they won the City League title in 1939. He also played football for Heinrick as well and graduated from the "Old Brown Castle" in 1939.

In 1943, Turnbull had the honor of catching in the opener of the Shipyard Leagues at Tacoma's old athletic park for manager Pip Koehler. Bill also had the privilege of catching Floyd "Lefty" Isekite, considered on of the great (and fastest) pitches in Tacoma baseball history. Because of this experience, Bill had hopes of playing professionally and tried out for the Yankees organization where he caught Yankee hurler Bill Bevens but his plans were interrupted when World War II intervened and he headed to Italy.
He was still passionate about playing when he returned however and spent time with various teams in the Valley League and the City League throughout the 1940s. He later coached Babe Ruth and Connie Mack League teams in the area from 1951 to 1962, including a Babe Ruth championship in 1956.

Outside of baseball, Turnbull also had the honor of winning the 1990 Ron Hume for Juniors golf tournament with his brother Maurice at Madrona Links. Bill and Moe had the best ball low net score of 56 and 1/2. Turnbull had five children and settled down in Gig Harbor after retiring.